Alright… I need to discuss the ending to Far Cry 5. I started playing the game shortly after  release. With a full work schedule and travel, I just finished the story this weekend. I have about 35 hours into the game so far. I should note, this is my very first Far Cry. Yes, my very first. Overall, I’m in love with the setting, the gameplay, the soundtrack, and the graphics. Pretty much in love with everything to be honest. Now… let’s get to that ending.

Caution: Spoilers are ahead. Tread lightly.

So, we have three possible endings to the game. The first ending to the game, being dubbed the “Secret Ending,” can be achieved in the first ten minutes of the game. Simply refuse to arrest the Father. You and your law enforcement ‘buddies’ will leave and the game will end. Roll credits. Yes, you can avoid everything that happens in the game just by refusing to arrest the primary antagonist. Pretty neat!

Now, on to the main endings. Once you have defeated all of Joseph’s family you will be given the option to confront him once and for all. You’ll arrive to the Father’s compound (where you first began the game). He will deliver a great monologue about all you have done. He will show you that he has control (via the bliss) of your NPC friends that you’ve rescued through the game. He will then present you with a choice: walk away or resist his offer.

Choosing to walk away and leave the Father with his flock triggers the “Bad Ending,” in which you and your law enforcement ‘buddies’ will leave. On the ride out of Hope County, Sheriff Whitehorse states that you’ll be getting the National Guard and bringing the hammer down on our friend the Father. Whitehorse turns on the radio, which is playing ‘Only You.’ Your vision begins to turn red and you black out. Credits roll. It can be assumed that Jacob’s programming kicked in and you murdered your ‘buddies.’

Choosing to resist the Father’s offer forces you into a final confrontation with him. This triggers the “Good” and true ending. After a somewhat lackluster boss battle, all seems right. You’re about to arrest the father when a white flash blinds you. Looking up, you see a mushroom cloud growing in the distance. Long story short, Hope County (at the very least) has been hit with three nuclear weapons. You rush to Dutch’s bunker but get in an accident. It would seem all of your friends are dead. You’re dragged into the bunker by the Father, who then (presumably) kills Dutch. He explains that he was right, his vision was fulfilled, and that you are now his family. His last words to you, before the credits roll, are “I am your Father, and you are my child. And together, we will march to Eden’s Gate.”

For about five minutes I was thinking to myself, “did this really happen?” Was I influenced by the bliss? Did the Father somehow trigger the nukes in the three bunkers? Were we actually under worldwide nuclear apocalypse? Then I saw the title screen had turned from the beautiful country setting of Hope County to this… 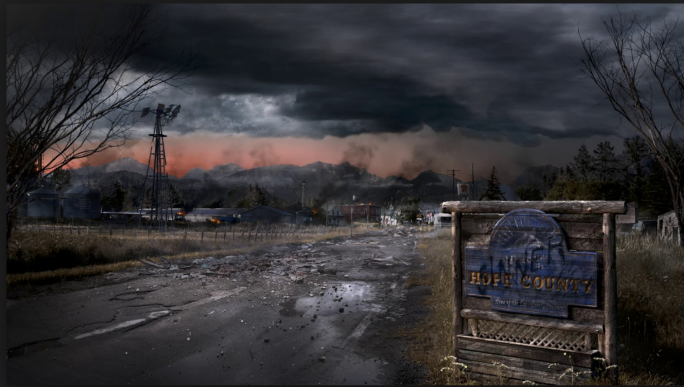 Yeah… this happened. I spent the rest of the night trying to process how this ending came to be. Ultimately, I have to say… I really, really enjoyed the ending. I know that is a very unpopular opinion out there. But I love it. Completely out of left field. The ending completely destroyed what you worked for in the entire game (which I understand is one of the major complaints). That is what makes the ending memorable and all that more defeating.

There is a very interesting Reddit post by user “StandsForVice” that postulates that the Father is the antichrist and you are the second coming of the Lord. This theory actually has pretty good weight, given the abundance of evidence throughout the game.

You, the deputy, fulfilled the prophecy laid forth in the book of Revelations, opened the 7 seals (through various means), and caused the end of the world. You are the Lion of Judah, the only one capable of opening the seals, also known as (the Second Coming of) Jesus.

I feel that you, the Deputy, helped save some of the residents of Hope County by clearing out prepper stashes throughout the game. You also bought everyone a little more time by trying to help and liberate the area. While your work was ultimately in vain, the ending can be a grim reminder of how things don’t always pan out the way you want them to. Again, I know this is unpopular. But once you start looking at the evidence of the “Second Coming” theory, I feel that this was some excellent writing and game design by Ubisoft.

This ending got my seriously introspective, had me seeking additional answers, and had me truly feel something. I cannot say that about most games. Bravo Ubisoft.

What do you think? Did you like the ending? Why or why not? What are your thoughts on the “Second Coming” theory?